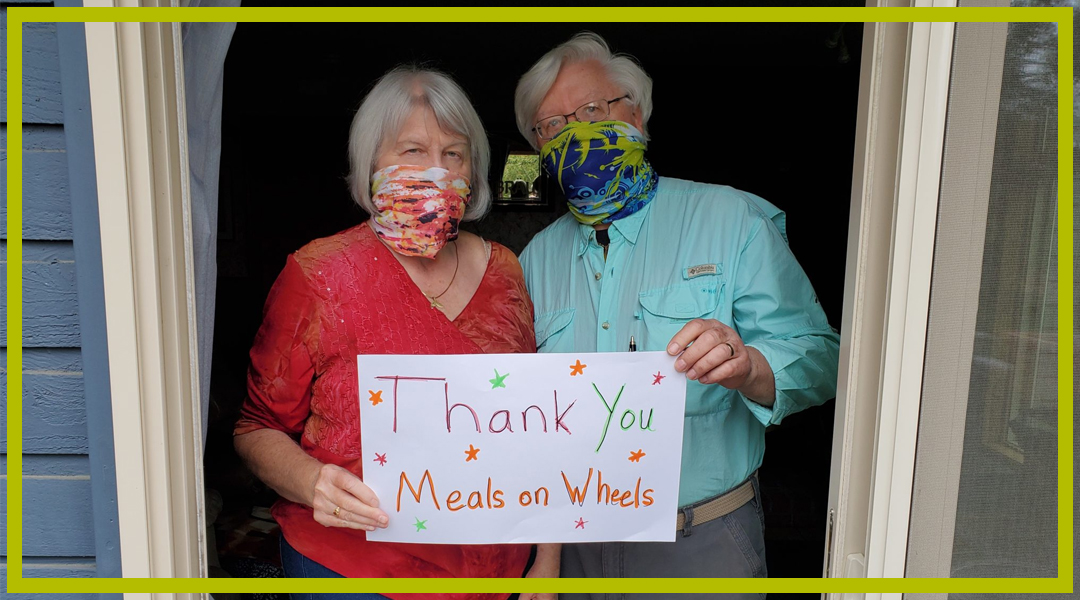 IN CRISES, IT IS UNDERSTANDABLE that many people turn inward, focusing on themselves and the welfare of those in their immediate circles. Families must often stretch dollars that were already thin. Business owners have to make one hard decision after another. It’s tragic, but it’s also reality.

Thankfully, the opposite rings true as well. When communities recognize everyone is in the same boat, they band together to pick up those less fortunate. During the Covid-19 pandemic, Meals on Wheels People has received an unexpected and extraordinary outpouring of this type of generosity and support, from Portlanders and beyond, and the nonprofit’s staff, volunteers, chefs, and drivers are overwhelmed with gratitude for the kindness that is keeping their efforts to feed seniors afloat.

Over the course of one month, from mid-March to the middle of April, Meals on Wheels People registered about 1,800 volunteers to deliver meals. By comparison, during the same period in 2019, they received only 100 or so similar inquiries. In more ways than one, the organization is in uncharted territory, yet for the first time in 50 years, they’re not short on volunteers—though they will always welcome anyone who wants to be involved.

3,000 frozen vegetarian entrées courtesy of Quorn Foods strengthened the nonprofit’s emphasis on nutrition, as did the 300 cases of frozen berries from Scenic Fruit Company and the thousands of boxes of fresh produce from Pacific Coast Fruit. Though it’s not a usual addition, See’s Candies even offered five pallets of boxed chocolates. And let’s face it, nothing brightens the mood like a sweet treat.

Meals on Wheels People’s mission goes beyond supplying healthy food to older adults. Many seniors experience isolation and loneliness, conditions that can be extremely detrimental to their well-being; so, several benefactors have gotten creative. Holocene, a music venue and nightclub known for its dance scene, produced dozens of music videos and 1950s and ’60s cover songs to inspire homebound seniors, even including shout-outs to volunteers. And employees of the City of Gresham wrote hundreds of heartfelt cards in order to spread extra joy in people’s lives.

The coronavirus’s contagiousness and the heightened risk it poses to elderly people makes volunteers’ work delicate. To ensure everyone’s safety, Sock It to Me has supplied one protective mask for each one purchased by customers. Drivers and deliverers cannot wash their hands out on their routes, so Straightaway Cocktails, Freeland Spirits, and Rosehip Medic Collective, a voluntary group of health care activists who provide first aid and emergency care on the streets and at protests, equipped Meals on Wheels People with thousands of bottles of hand sanitizers.

Of course, the financial contributions are equally appreciated. Stoller Winery and Lenné Estate Winery each committed a percentage of their proceeds from the previous months to the nonprofit. Fine-dining restaurant Papa Haydn did the same with gift card purchases. Going the Social Distance Relay chose Meals on Wheels People as the beneficiary for its inaugural event, and Portland Gear donated $2.50 from each special “PROUD” shirt sold. Paul Shearer, a local retiree and longtime patron of the Original Pancake House in Southwest Portland, spent his $1,200 stimulus check with the eatery to provide breakfast for Meals on Wheels People’s Central Kitchen staff every Thursday for weeks.

Larger companies that are able to do so have come through with major impact, including FamilyCare Plans, Lematta Foundation, Vital Life Foundation, OnPoint Community Credit Union, and Community Foundation for Southwest Washington, to name a handful.

As encouraging as these and other unmentioned altruistic acts are during this hardship, Meals on Wheels People hopes to convey a continual call to action alongside its message of thanks, because the only way forward is together.

Check out article on Portland Monthly.