Sharing a Cuppa and a Smile | Meals on Wheels People 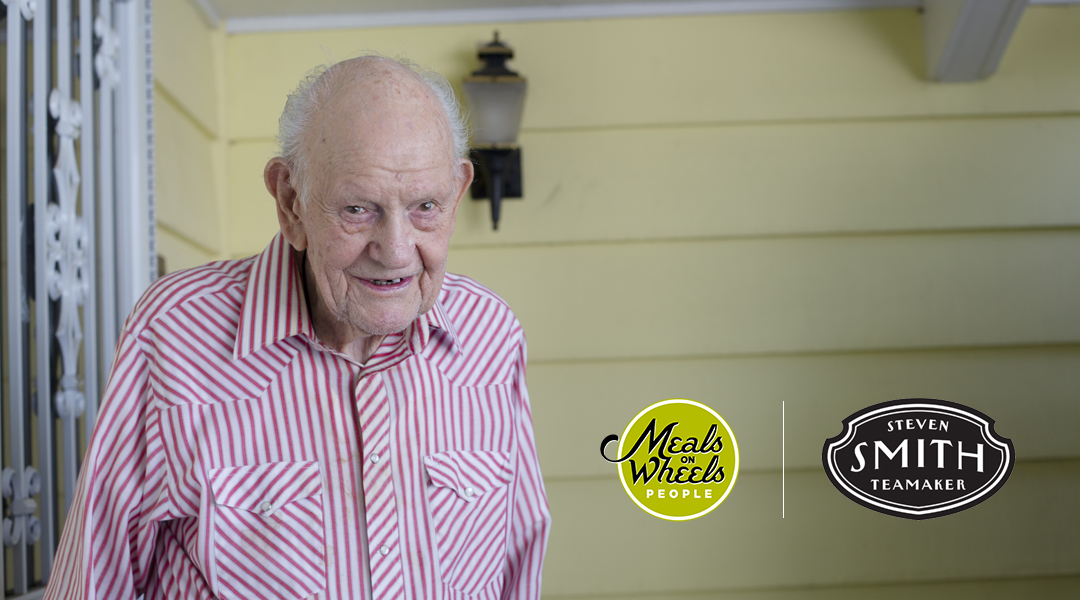 Watching the steam dance atop a mug, smelling the invigorating aromas, soaking up warmth through your hands — enjoying a cup of tea is one of life’s simple pleasures, and at Steven Smith Teamaker, their wares are crafted to also offer a sense of relief from the weight of the world. In a year when that burden has seemed heavier than ever, the company teamed up with Meals on Wheels People to brew something ever more precious these days: a chance to safely socialize, through the nonprofit’s Tuesday Tea Time program.

Under normal circumstances, many of the homebound seniors who receive weekly meal support experience harmful isolation and loneliness. It’s the job of Dori Grabinski, Meals On Wheels People’s Social Connection Programs Coordinator, to foster opportunities where her elderly clients can connect with their peers, an especially vital effort during the Covid-19 pandemic.

“It comes as no surprise that with a lot of older adults, their social worlds shrink so much with age,” she says. “Having a pretty limited pool of people in their life, things like taking their weekly trip to the grocery store or seeing their health care workers, those things were a big social component of a lot of my clients’ lives. Taking that out of the equation has had such a big impact on their well being.”

Although her work takes a variety of forms — games of bingo or open call-in lines, for example — most of the time Grabinki is organizing weekly telephone conference calls, where a small group of five to seven seniors are able to chat and build friendships. Tuesday Tea Time took this format and added a refined twist: the seniors who signed up were sent a care package with a diverse selection of teas, courtesy of Smith Tea and its sister brand Stash Tea, as well as lemon cakes, muffins, and other delicious baked goodies.

For people like Bill Muldoon, 91, those weekly phone get togethers were a welcome break from the past year’s seclusion. “I’ve been pretty much quarantined myself,” he says. “So, I’ve been out once, no twice, to the grocery store since March of last year. And about a half a dozen times to the doctor or the dentist. But I don’t just go out indiscriminately, you know.”

Muldoon certainly has a story worth hearing. A native of Derbyshire, England, he served in the British Army in the late 1940s, before moving to the United States in 1951. While studying at a small school in Iowa, he decided to take a summer job at a pea cannery all the way in Milton-Freewater, Oregon. Once he finished his duties there, he ventured to Portland.

“I went to a skating party at the old Imperial Rolling Rink on Grand Avenue, and I met a girl. That was the end of that,” he says with a chuckle. Eventually he married that young lady, and what followed was 58 years of marriage, and more than three decades working as a school teacher.

As an Englishman, tea has always been near and dear to Muldoon’s heart, even thousands of miles from his motherland, so it’s unsurprising that his favorite variety from Tuesday Tea Time was the English Breakfast. The Irish blessings he gave at the end of each session were popular with everyone involved.

Product that Smith Tea donated to Meals on Wheels People will go out to clients as a part of the upcoming Spring Garden Tour. “We also do one off virtual events,” explains Grabinski. “The idea is to sort of bring fanfare into people’s homes during the holidays, a time when people are feeling particularly lonely.”

Last Christmas, her team recorded scenes from various festive activities around town and then streamed them, helping clients get connected to watch. At the same time, they hosted little discussion groups about what they were seeing. In May, the Spring Garden Tour will expand on this concept, in this case sharing footage of Portland’s blooming flowers, lush green spaces, and vernal beauty.

For Smith Tea, the opportunity to cultivate experiences that bring seniors together makes working with Meals on Wheels People a dream partnership.

“Knowing that community of people, being able to add a little something special to their day, it makes us all very happy,” says Brand Director Katie Burnett. “We know that tea can provide a moment of respite. We like to think our tea is not only soothing and comforting like all tea is, but it’s something that can awaken your senses, lift you up, be a conversation starter, and be invigorating and creative.”