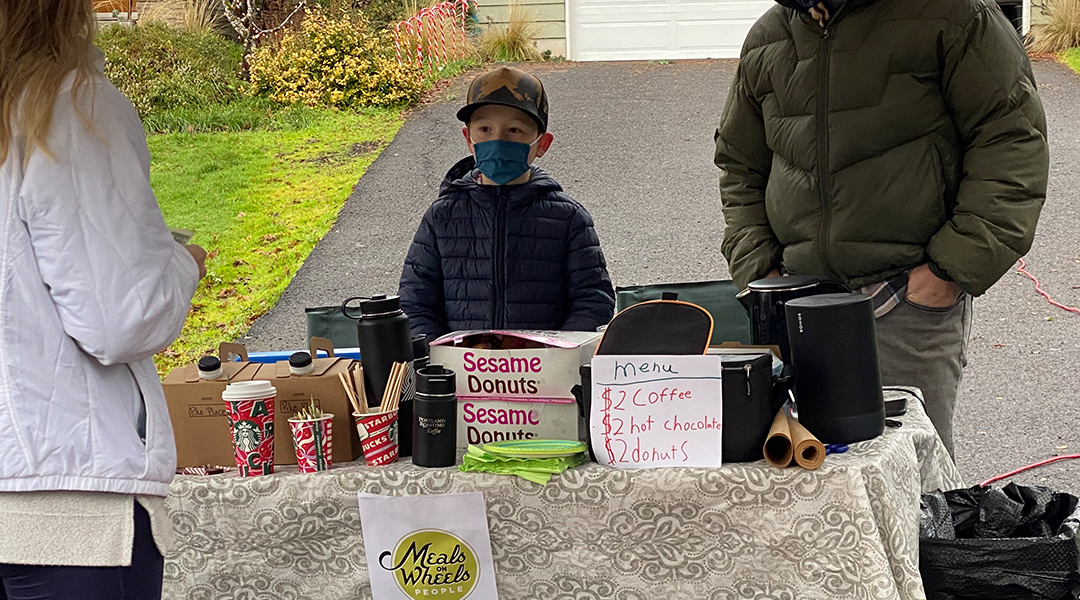 In partnership with PDXPOP! and Nossa Familia Coffee, Cooper’s Coffee stand will serve coffee and treats at Meals on Wheels People on Saturday, February 12, 10 AM-1 PM

PORTLAND, Ore., Feb. 3, 2022 — Cooper Hammond, 8, is partnering with Meals on Wheels People (MOWP), PDXPOP!, and Nossa Familia Coffee to give back in a big way and support older adults in the Portland metro area with his Cooper’s Coffee stand on February 12.

Growing up in a family that values giving back to its community, Cooper has adopted an annual tradition of creatively supporting a new charitable organization every holiday season. Over the most recent holidays, MOWP was the lucky beneficiary of Cooper’s giving heart—and emerging business acumen.

After learning about MOWP while visiting his local Green Zebra grocery store during Donate Dinner, a MOWP initiative to ensure all older adults receive nutritious meals, Cooper decided to launch a coffee stand in his neighborhood to raise funds for those same older adults facing food insecurity and social isolation. It was a smashing success!

Now, Cooper is taking his passion for serving others to the next level with another pop-up event to benefit the needs of older adults in our community. On Saturday, Feb. 12, Cooper’s Coffee stand will be back in action serving up warm drinks, cheer, and a very special edition of PDXPOP! and Nossa Familia Coffee’s best-selling Teodoro’s Italian Roast.

WHAT: Cooper’s Coffee stand will be open to the public.

“We are so thankful for Cooper and his family,” said Tony Staser, Chief Development Officer at Meals on Wheels People. “We love when anyone, and kids especially, comes up with creative ways to give back. The fact that Cooper is giving to our older neighbors makes his impact even greater. I hope others are ignited to action after hearing Cooper’s story. Whether it’s volunteering—or holding their own coffee stand—anyone can give back.”

Through www.cooperscoffee.org, Cooper is bringing awareness to the needs of our older neighbors. By showing adults and children alike that anyone can give, Cooper is changing the lives of many. Through the month of February, purchase both PDXPOP! and Nossa Familia Coffee limited-edition Cooper’s coffee popcorn and coffee. Proceeds will benefit homebound older adults in our community through Meals on Wheels People programs.

About Meals on Wheels People:

Meals on Wheels People has been changing lives, one meal at a time, since 1970. We provide more than a meal to thousands of older adults in the greater Portland metro area. Our service not only alleviates hunger and social isolation but allows seniors to live independently with dignity in their own homes. Aging in place reduces depression, falls, and hospitalization as well as the high cost of institutional care. For more information, visit: mowp.org.

PDXPOP! is helping to change the lives of our older neighbors, one bag of popcorn at a time. Established by Meals on Wheels People in 2015, PDXPOP! was born with a bang as a creative revenue stream to the organization and has successfully joined the gourmet popcorn world with sought-after classic and limited edition flavors. Proceeds of popcorn sales directly benefit Meals on Wheels People and the thousands of older adults served. PDXPOP! is gourmet popcorn doing great work!

Nossa Familia Coffee is a Portland, Oregon-based roaster that was founded in 2004 by Brazilian native Augusto Carneiro. Augusto has always felt a deep sense of pride for the work his family has done growing coffee in the highlands of Brazil since the 1890s and he formed Nossa Familia to bring his family’s coffee to Portland. Early on, all of Nossa Familia’s coffee was imported directly from his family’s farms, and today these Brazilian fazendas remain at the core of their direct coffee trade model. Over time Nossa Familia has developed deep-rooted relationships with coffee growers around the world, bringing you excellent specialty coffees from Guatemala, Nicaragua, Peru, Ethiopia, and beyond.