The nearly 20-year relationship between New Seasons Market and Meals on Wheels People is a natural one. Indeed, the locally owned grocery understands the impact of providing nutritional foods to its customers, so the nonprofit’s fight against senior hunger is a kindred cause. Remarkably, though, the span of years that the organizations have spent working together to give back to the community was inspired, at least in part, by one gesture of goodwill.

In the company’s early days, Brian Rohter, the first president of New Seasons, was moved by acts of kindness shown to his own parents, who lived in Chicago. “At some point his parents were in need of help,” explains Claudia Knotek, the company’s philanthropy manager. “Some young men stepped up and helped, and he [Rohter] said, ‘How do I thank you? I wasn’t there; I was on the other side of the country.’ And they said, ‘Pay it forward to somebody else’s parents.’ So that was his initial interest, and then it became a company priority.”

Melissa and Peanut, one of the New Seasons Volunteers

When New Seasons opened doors at its first location in 2000, in the Raleigh Hills suburb of Portland, it hosted a benefit barbecue on its grand opening weekend with proceeds benefiting Meals on Wheels People (then known as Loaves & Fishes). Two decades later, New Seasons has donated more than $2.5 million to Meals on Wheels People, making them its single largest corporate donor.

Knotek, who serves on Meals on Wheels People’s Board of Directors, began to contribute to the nonprofit in 2004, and she holds dear the connections she has made while delivering meals with her New Seasons coworkers. “To us it’s just so meaningful,” she says. “The seniors in our community are so often forgotten. We can touch them in this small way and make them feel that they’re important or that we have a minute to talk to them when we come and deliver the meal. As we all know, we may be the only other human being they see or talk to all day. It means so much more.”

Most New Seasons stores have a committed team and a specific route they serve. Employees regularly dedicate their time to drive and deliver food to seniors, building meaningful relationships along the way. Their support is always vital, but every now and then the volunteers’ weekly visits become even more lifesaving. 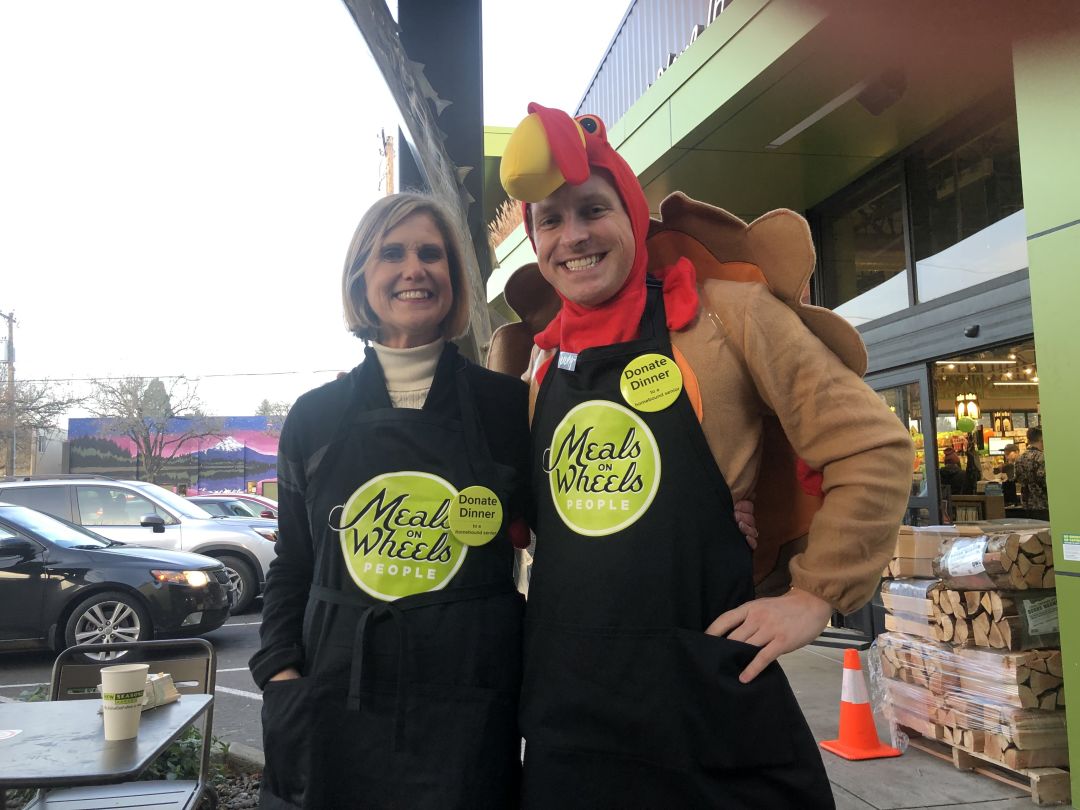 “One time when I was delivering meals, we got to the door, and the person didn’t answer,” Knotek explains. “We tried calling her, but she didn’t answer the door. I looked in the windows on the front door, and I could see her lying on the floor with a dog circling around her.” Thankfully, they called 911, and paramedics were able to take the elderly woman to the hospital—highlighting the significance of just being there for people.

It’s estimated that New Seasons staff members have pledged more than 13,000 volunteer hours via numerous programs for Meals on Wheels People, including the Donate Dinner campaign that helps feed those in need around the holidays. “We would wear buttons or have signs that encouraged people during the five days before Thanksgiving, that Saturday through Wednesday, to donate a meal to a senior,” says Knotek. “We would just give them a little piece of paper that they could put right on the conveyor belt, and then the cashier would say, ‘Oh, are you interested in donating a meal, or multiple meals?’ It would be a reminder.” In its first year (2003), the campaign raised $2,200. Last year, New Seasons customers helped raise $239,000.

Early efforts to be more sustainable saw New Seasons also implement an initiative called Bag It Forward, which paid shoppers for bringing their own reusable bags by giving them five cents back for each. “Our customers said to us, ‘Hey, we think this is really nice that you’re rewarding me for bringing in these reusable bags, but I’m really OK, and I don’t really need that nickel. Can I donate it?’” That amount may seem meager, but in 2019 it added up to $130,000—a substantial sum.

As with most challenges, New Seasons knows fighting hunger is a challenge best tackled together. By applying a sense of family and connection, they’ve been able to extend their reach and benefit many lives.